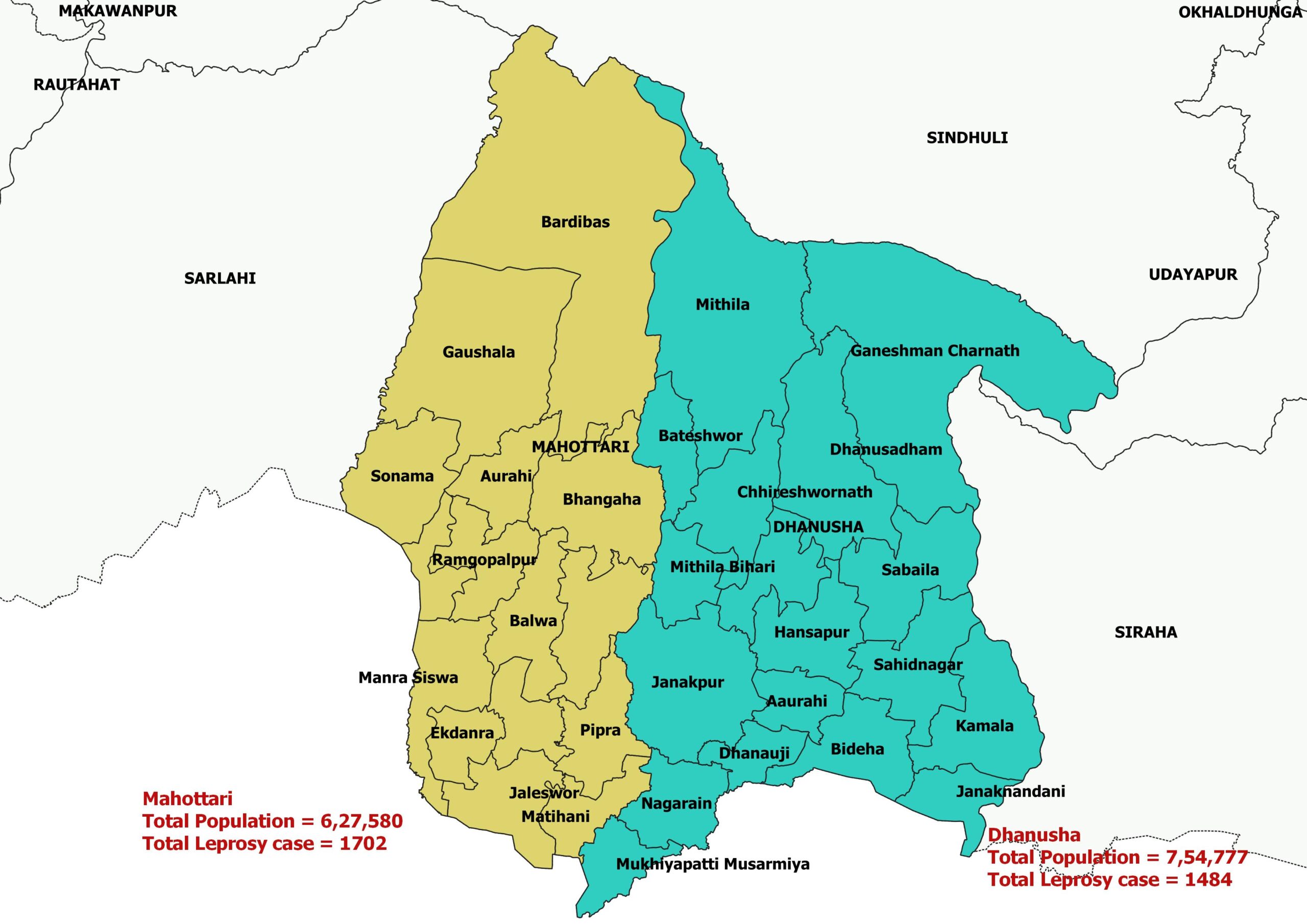 PEP++ – an enhanced regimen for post-exposure prophylaxis, in which 3 doses of rifampicin and clarithromycin at Days 1, 29 and 57 (four-weekly) is given to contacts of a case.

Leprosy (also called Hansen’s disease) is an infectious disease that is disrupting the lives of millions of people through disability and exclusion. It is caused by the very slowly growing Mycobacterium leprae (M. leprae). Approximately 80% of the international caseload is detected in predominantly low-income countries of the world. Nepal is one of the leprosy endemic countries in the world. In 2019, a total of 3282 new leprosy cases, with the new cases detection rate of 11 per 100000 populations, detected in Nepal. Even after declaring leprosy elimination at 2010, disease burden due to leprosy is quite high in Nepal similar to several other countries such as India, Indonesia, Brazil etc in the world.

Despite the impressive decline in the global number of patients registered for leprosy treatment, the expectation of interrupting the chain of transmission has not been met. The annual number of new cases and the proportion of new cases with G2D as well as the child proportion have remained unchanged, indicating ‘stagnation’ in leprosy control. Sustainable Development Goal (SDG) 3 (‘Ensure healthy lives and promote well-being for all at all ages’), has nine targets, one of which is ‘A 90 percent reduction in the number of people requiring interventions against neglected tropical diseases (NTDs) by 2030’. In order to achieve this, it is essential that the transmission of leprosy bacilli be stopped.

Different research, including LPEP piloting in Nepal 2015 – 2018, has provided the evidence on SDR PEP with ~60% protection as well as feasible & cost effective, but the efficacy of SDR-PEP is highest among neighbours and social contacts and much lower among blood relatives and household contacts. The reason for this is likely that, among household contacts, a higher proportion of contacts already has a stage of leprosy infection that can no longer be treated with a single dose of rifampicin (SDR-PEP). A more powerful preventive regimen is therefore needed that is able to cure subclinical leprosy in contacts with a higher bacterial load. This regimen is expected to be sufficiently bactericidal to treat people with subclinical leprosy infection that harbour the higher number of M. leprae.

To interrupt the transmission of M. leprae in the project interventions areas, which eventually will lead to zero new cases of leprosy in these areas.

Because of the long incubation period, believed to be 2-5 years on average, the latter would normally not be achievable within 5 years. However, if we combine active, early detection and treatment of new patients with rigorous preventive treatment of those known to be at risk, we believe that it will be possible to interrupt the transmission of M. leprae bacilli in a given community within 5 years.

The main results that the project aims to achieve are as follows;

The last decade has seen a stagnation in the incidence of leprosy patients, levelling off to between 210,000 and 250,000 globally per year. To achieve SDG 3, a 90% reduction in the number of people requiring treatment for neglected tropical diseases [including leprosy], it is essential that the new case incidence is greatly reduced. The SIMCOLEP model predicts that the PEP++ project would achieve this by combining early detection and treatment of leprosy index cases, blanket chemoprophylactic treatment in high endemic pockets of leprosy, and detection and treatment of subclinical infection among household members and other close contacts.

PEP++ project has been approval has been granted by LCDMS/EDCD/NHRC. The coordination with PHD, Madhesh Province, DHO; Mahottari and Dhanusha along with Municipalities/ Health post has been started.